The research project aims to analyse the housing issue in the countries of the Global South. In addition to investigating the phenomenon, it will focus on strategies to guide a process of developing affordable, low environmental impact housing, maximising social acceptability, architectural and urban quality.

Being at an early stage of my PhD research, I based my presentation for the Ljubljana CA2RE conference by reflecting on the methodological approach to the research topic since the working methods that will be privileged consists of two types: the analytical one, to describe, interpret, contextualise and deepen specific concepts or phenomena, based on the reading, interpretation and constant verification of information and data; the empirical one, used in the field with regard to the identification of implemented projects, instrumental in deepening problems and ways of using housing in Sub-Saharan Africa, and through the design probes necessary to understand possible strategies to guide a process of housing development aimed at improving the comfort, sustainability and affordability of buildings.

It is only in recent decades that the theme of the social habitat has taken on a role of great relevance within critical disciplinary reflection. The 15th Architecture Biennale, "Reporting from the front", curated by Alejandro Aravena, can be taken as a synthesis and as one of the highest moments in which these themes have been put at the centre of the debate, as the curator himself underlines: "[...] The concept of quality of life extends from basic physical needs to the most abstract dimensions of the human condition. It follows that improving the quality of the built environment is a challenge to be met on many fronts, from ensuring practical and concrete standards of living to interpreting and realising human desires, from respecting the individual to caring for the common good, from accommodating the performance of everyday activities to encouraging the expansion of the frontiers of civilisation." 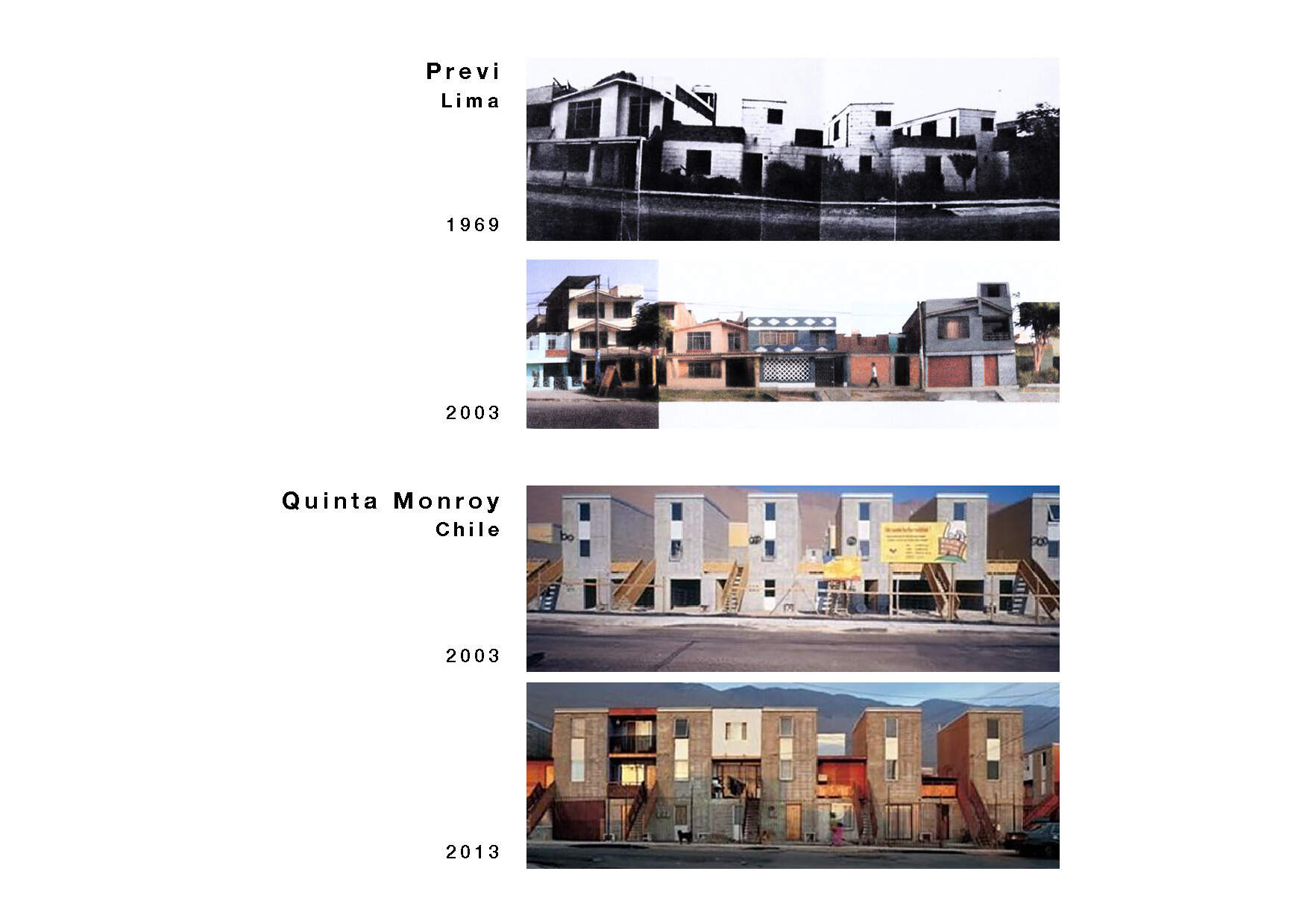 If we go deep into the disciplinary tradition and reconstruct the timeline of the debate of low-cost housing in Global South contexts through some critical texts (D'Auria V. et. al., 2010), we go back to the roots of the debate on the social housing project: the CIAM IX of 1953. It was on this occasion that the term habitat was born, when, especially the members of Team Ten, undertook to reinterpret the tradition of the Modern Movement, bringing the inhabitant to the forefront and assigning him a fundamental role in the project. The main characteristics of the habitats were typological indeterminacy, flexibility and non-enclosure, i.e. the undefined a priori possibility to evolve, grow and change almost spontaneously, like the villages, especially the African and Maghreb villages and the suburban squatters of the Global South. This example shows how reflection on housing issues in the African continent has ancient roots and was a field of experimentation that allowed the protagonists of those researches to redefine the coordinates of "another modernity", which consisted in the assimilation of modern architecture through the search for a point of mediation with places and cultures.

In spite of the relevance of the topic and a wealth of research in different contexts in the global south, the research on social housing in Sub-Saharan African countries has not yet consolidated a critical mass of experiences that could spread new, more virtuous practices. While sociological, economic and urban planning phenomena have been well described in the literature, an accurate look from a project perspective seems to be lacking.

Therefore, the research aims to use the project as a research tool to understand how it behaves in contexts of poverty, inequality and the effects of climate change, declined in two ways: on the one hand the project will be an analytical tool of reality through which to observe the existing (comparison of case studies significant to the understanding and description of the phenomenon) and, on the other hand, the project wants to be an empirical tool of knowledge, through which to deepen some project probes to bring out more clearly the problems related to the social housing issue of the countries of Global South. My doctoral research seeks to engage in the debate on low-cost housing in the Global South contexts without, however, falling into trivialization by confusing the formal, and the control it implicitly entails, with a kind of racial restriction, resulting in the worst cases in an idealized replacement of the formal with a naive and picturesque celebration of informality as the only alternative to government control over the production of city space. In the face of such generalization, it is necessary to refer to models that have been consolidated in their process through agreements between policies designed and directed from above and citizen participation from below, and it is in the furrow of these studies that my research proposes to be inserted.

Within the just outlined framework, to look to projects thought analytical and empirical approach, I compared two case studies: PREVI Lima (1965) and Elemental Chile (2002) in order to start from the diagnosis of the current situation and the best of the international experience in this field. Both projects are in South America in fact, until the beginning of the 21st century, it was Latin America that led the field of research on experimentation and housing policies in informal settlements.

PREVI is a paradigmatic consolidated case that addresses how to strike a balance between these extremes. Its evolution and subsequent changes were essentially anticipated in the original design, but four decades of informal mutation gives evidence that the formal definition and consolidation of its urban voids has proved the need for formal control as a means to incorporate the degrees of flexibility and change that any community needs. ELEMENTAL is still a “young project”, perhaps is still too early to draw conclusions about the process, which is still ongoing, but precisely because of this it is interesting to understand how it is evolving. In both cases, PREVI and Elemental, the communities were involved in the decisions to be taken and possibilities were left open for future expansion, modification and customisation, according to changing needs, growth in the number of members or improvements in the economic conditions of the families to whom the accommodation is allocated. In order to compare the two projects and learn, both from their successes and failures, I propose to group the parameters to evaluate the quality of the living space into sub-variables: the functionality, spatiality and flexibility of the housing solution, the technical construction aspects and finally, the economic aspects that are connected and related to the two previous ones and the relationship of the housing with the city, its link with the urban context. 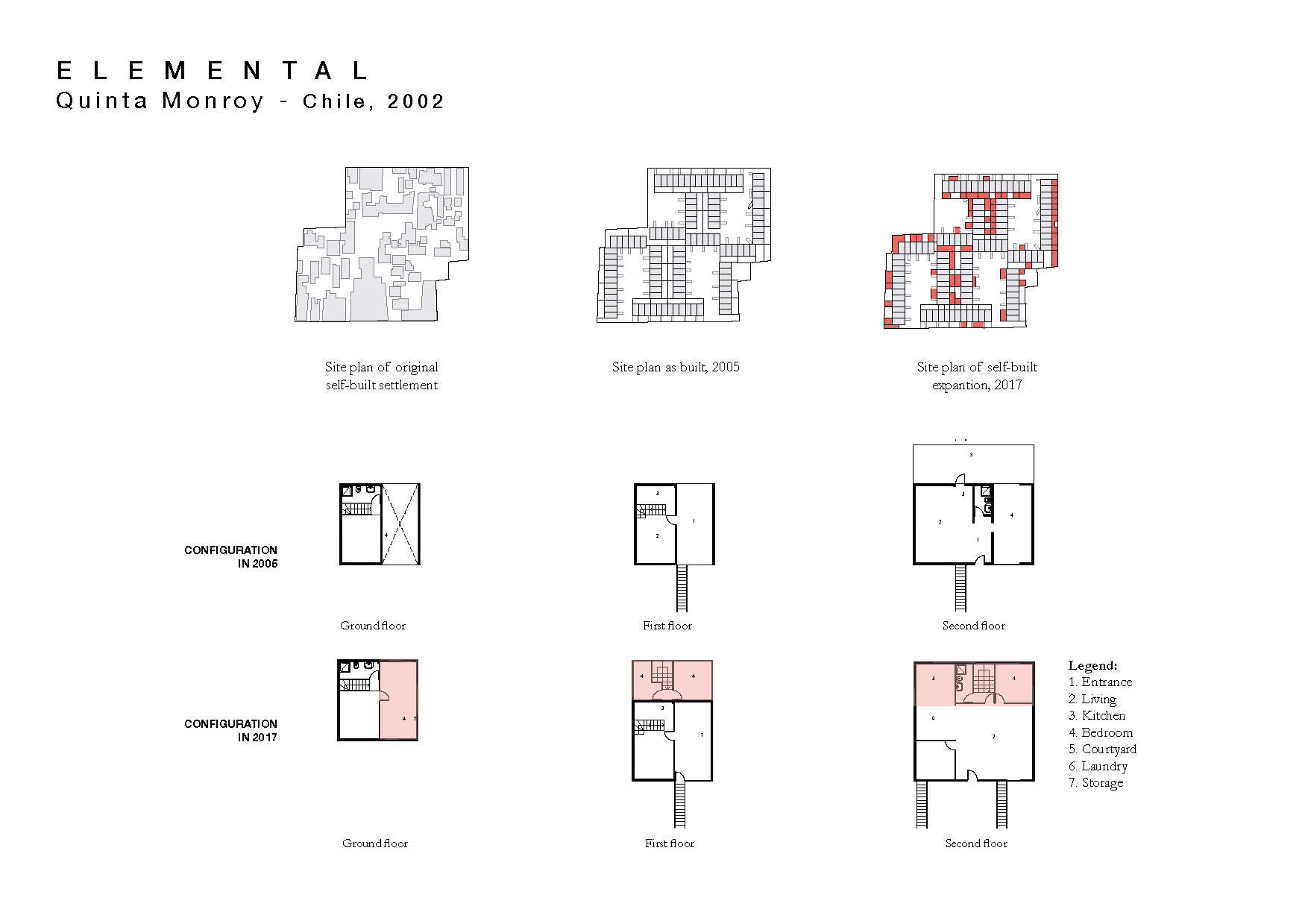 The aim for which I decided to approach the debate using these two case studies is to try to identify positive and negative aspects of the processes and results in order to make considerations to improve the design quality of the social housing in Sub-Saharian Africa and to set the methodological scheme in order to replicate it on a larger number of case studies which are going to organise my analytical and empirical working method. One of the first outcome of this analysis has been the recognition of common denominator of these projects, namely the principles of flexibility and adaptability, addressed and developed by each designer according to different criteria and expedients. Usually, researchers and architects use “flexible” for physical changes and “adaptable” for non-physical changes. Steven Groák proposed a distinction between these two terms; he defined “adaptability as capable of different social uses and flexibility as capable of different physical arrangements”. So, in general, we can say that a house is not a solid building; it is a system of activity. Any changes in the house users, their needs and the physical and cultural environment require a flexible system to adapt itself according to the changes.