The construction of the domestic imaginary played a central role throughout the centuries in the definition of cultures and societies, an if it is true – as Viollet-le-Duc mentioned in his Dictionnaire – that the order of the house and its distribution changes in a very long time 1, it is easy to assume how the history of human beings has been crossed by several moments of transition regarding the way and the form of living.

The exploration of the wide field of the domestic culture through the architectural lens implies the consideration of many other aspects, from the sociological and anthropological ones to the political and economic others. Using architecture as first level of investigation means to recognise that architecture itself refelcts the translation into a physical space of all the reasons at the basis of a particular way of living, and due to this, the architectural drawing should be considered as the investigation tool par excellence.

In detail, this research expects to consider the floor plan as the scientific tool to illuminate the analysis, in order to claim the strength of the two-dimensional drawing, while on the contrary nowadays three-dimensional images are definitely seducing the architectural scenario.

«Yet plans are everywhere: we spend most of our life within them […] and the plan translates many determinations—money, measures, code, gender, class, rituals, beliefs, ideologies, environmental conditions, etc.—into a specific spatial layout. With its conventions of scale, measure, and view, the plan acts—much like money—as a “general equivalent” within which a multitude of determinations coalesce into a measurable “universal” datum» 2.

These words by Pier Vittorio Aureli appear like a solid statement universally applicable, even if in the history of architecture some paradigmatic cases better express this condition.

It is the case of the English country house and its development during the half of the XIX Century, while the architects of Arts and Crafts Movement were on the verge to reformulate the most canonical principles of composition. This specific domestic model assumes a very strong value if we consider it as one of the essential moments in the historiography, exactly just like in the case of the Florentine palace or the Palladian villa, able to show how a particular kind of architecture became a reference to be emulated almost all over the world.

Furthermore, the English country house turned without any doubt into the symbol of the awareness of a new rising middle-class that aspired to take a distance from the new industrialised city of London, not just to refuse it, but also to govern it, and its domestic architecture shows how big were the potentialities of the plan in all its virtuosity and in all its experimented surprising freedom.

The Red House in Bexleyheath, built by the young architect Philip Webb in 1859 for and with his friend William Morris, stands as the true paradigm of a new sense of modern living and it is the plan of the house which manifests a great consciousness about the personal needs of daily life, a fresh new taste for comfort and a particular regard for intimacy unknown at that time. 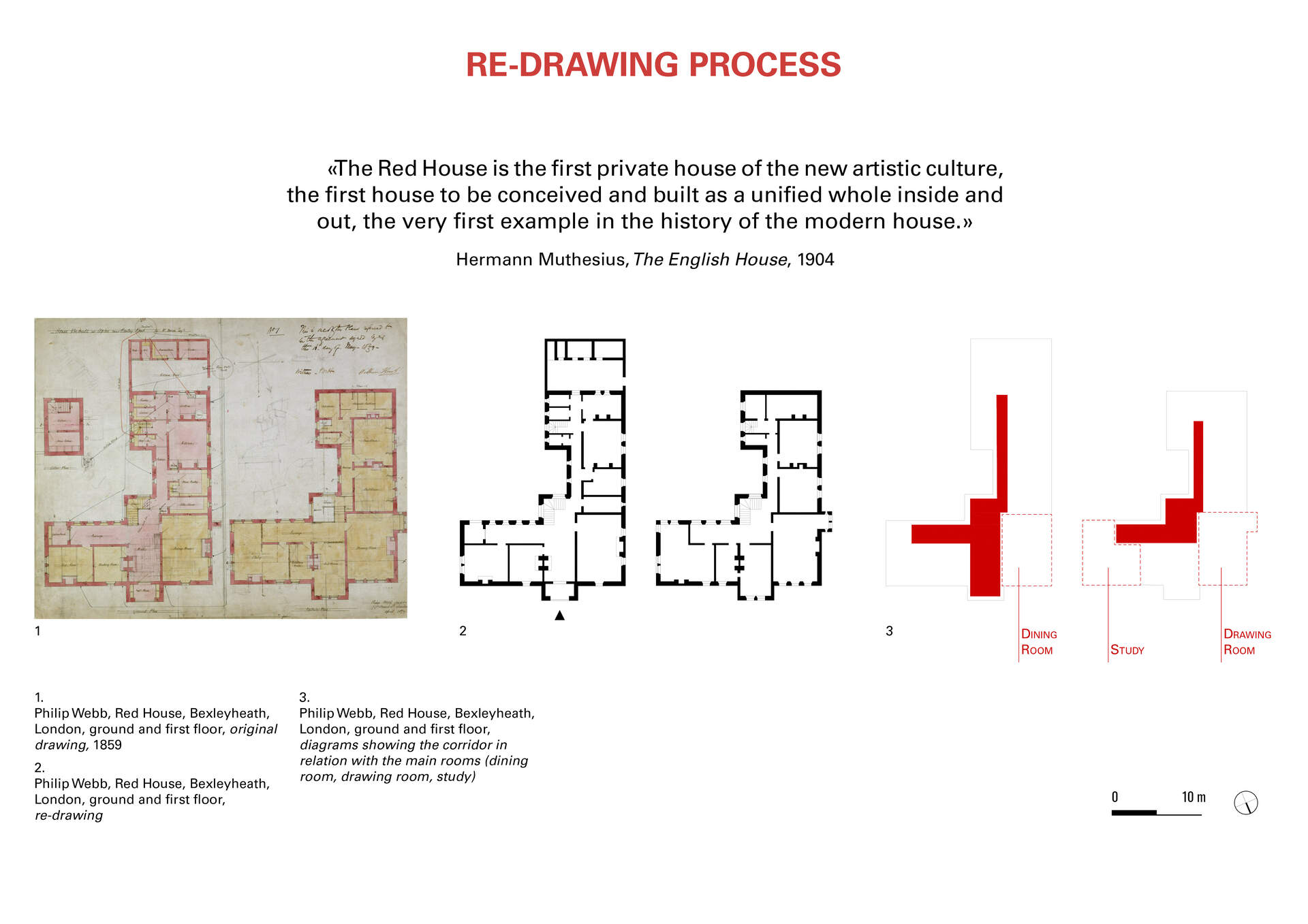 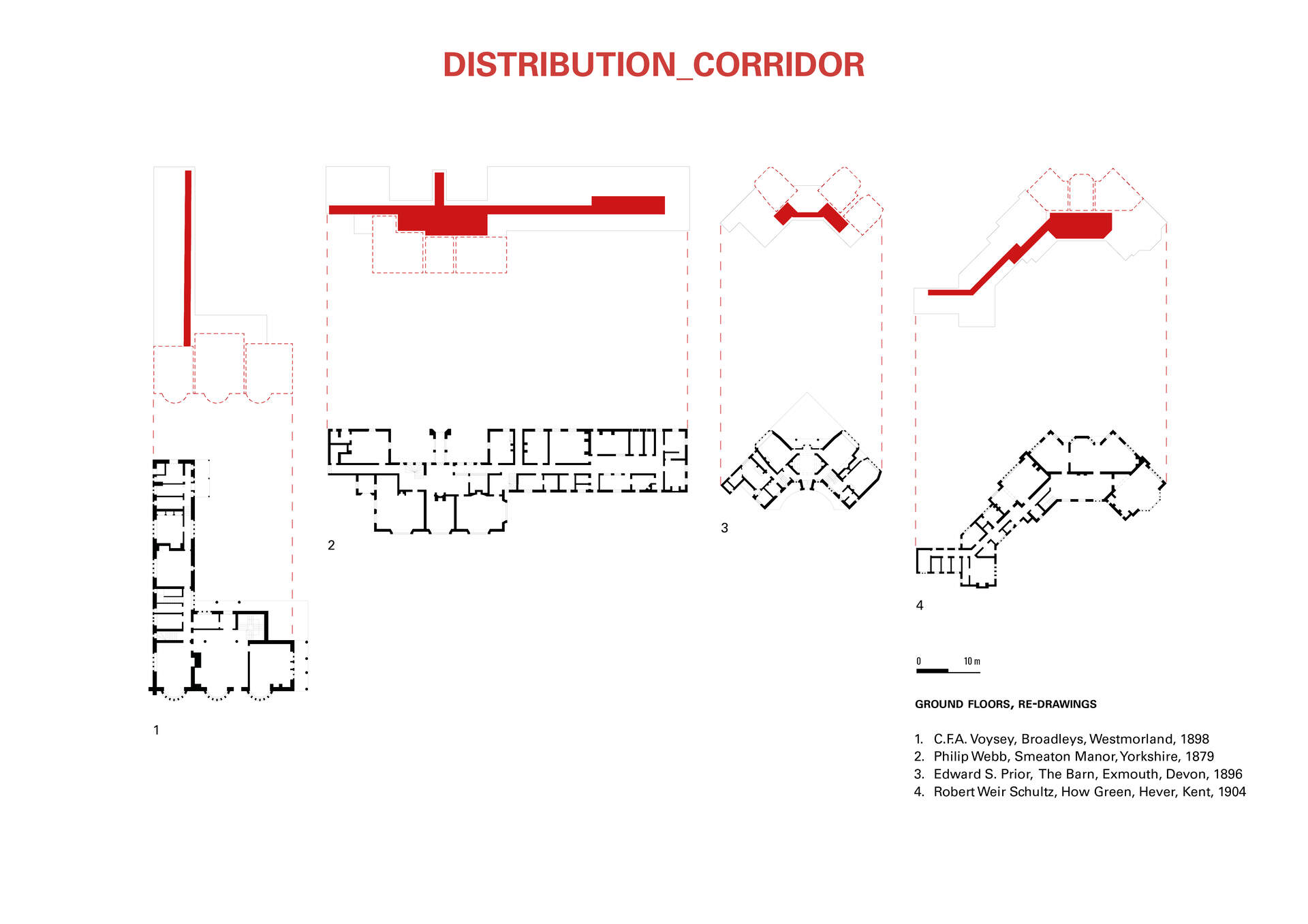 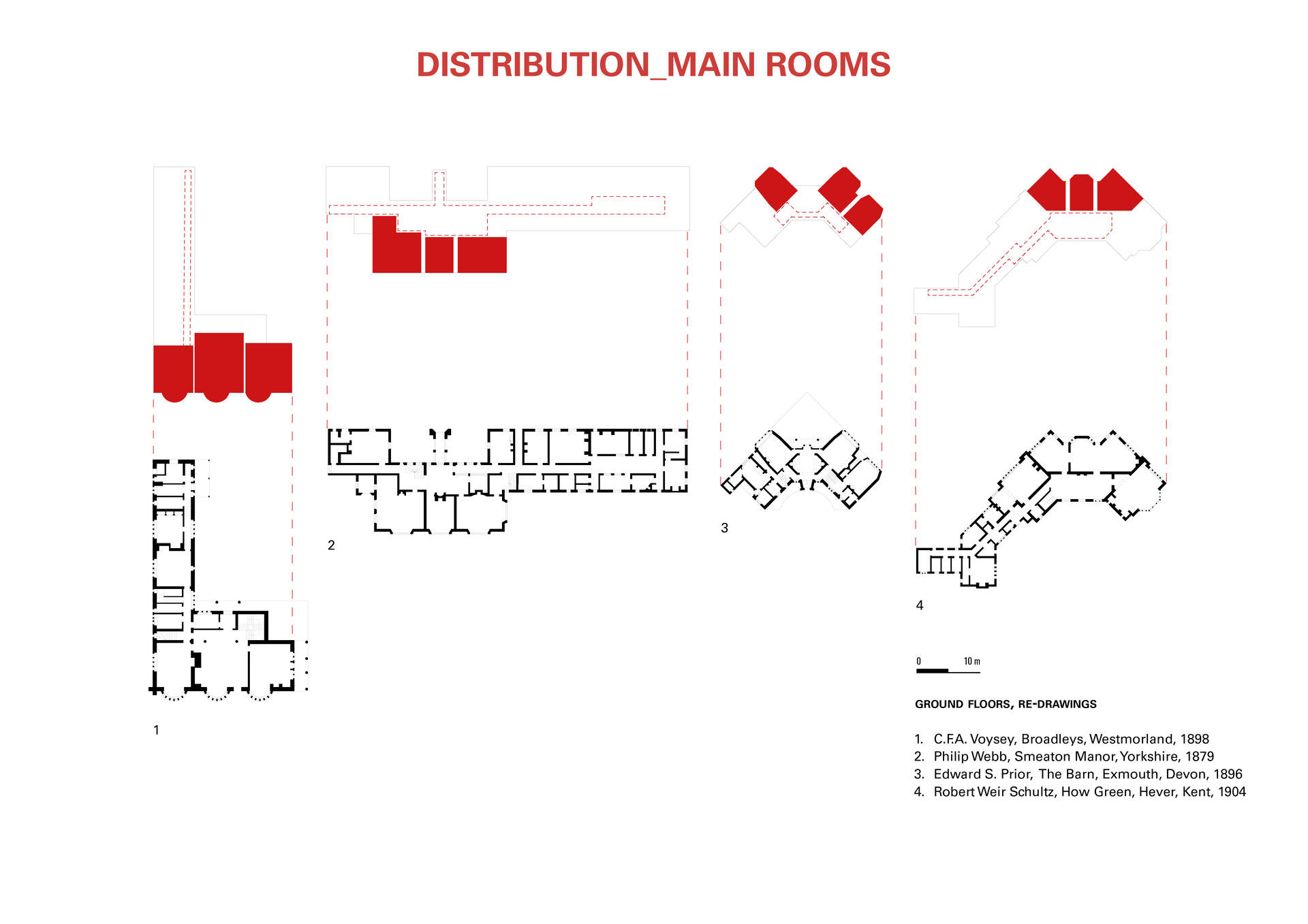 The beloved symmetry is abandoned in favour of an L-shaped plan equipped with the new functional element of the corridor that frees the inhabitants from the uncomfortable crossing of all the rooms, further symptom of the upcoming modernity [ 1 ].

This formula will be notably experimented, changed and declined in so many different possibilities, and a compared overview of the plans of the most significant projects developed after the success of the Red House clarifies how this typical English architectural phenomenon ended up becoming a pure trend, strongly representing the will of the rising intellectual bourgeoisie [ 2 ] [ 3 ].

An even more original arrangement is codified by Edward S. Prior in the project of The Barn, a country house in the Devon cliffs, in Exmouth. Here, the goal to get a major solar lightning inside the house is reached thanks to the 45° rotation of the main axis in line with the main rooms, in order to open and maximise the view towards the Ocean and the cliffs, generating the so-called “butterfly plan” [ 4 ].

Figure 4: Re-drawing sequence showing the genesis of the «Butterfly Plan» due to a 45° rotation of the main longitudinal axis in line with the main rooms.

For the English country house becoming universal is just a short step. The effort made by Herman Muthesius while being the ambassador sent to England to observe the domestic heritage, hugely contributed to the diffusion of the English domesticity around the world, and at the same time a significant echo is traceable in the Unites States of America, overall because of the intense colonial activity carried out by England.

The compared analysis of this relevant quantity of architectural plans [ 5 ] on the basis of universal parameters – as could be in the case of the rules of distribution of the house, its geometry, its axial arrangements – paves the way for a possible methodology to look at the historical heritage. The will to create a system of observation which joins the historical-critical point of view with the graphical one as a tool to support and enhance the analysis, should be seen as the main intent of the research.

In the far 1802 a pioneer in the science of classifying, named Durand, was strongly convinced about the usefulness of a comparative study of antique details and of the great importance to study the antique with the eyes of reason, rather than to stifle reason — as is all too often done — by an appeal to antique authority 3. Not so far from Durand’s obsessions, this research aims to build an exhaustive atlas of arts and crafts country houses, with their own plans, in order to simply make explicit what that generation of architects have done by instinct. Moreover, this research would like to be an invitation to look at history in a renewed way, as a still alive repertoire, possibly to draw from for today’s design.

Figure 5: Comparative table - Selection of a number of Arts and Crafts plans of country houses, from England, Germany and America, ground floors: re-drawings made by the candidate, showing axial rotations.