Focus the lens | Core of the research

Nowadays cities experience constant and apparently contrasting pull. On one side, the idea is to conceive a new model, informed and shaped by the ubiquitous presence of immaterial networks and technological advancement: the digital shapes the physical, especially in the Smart City frame.
At the same time, there is the need of a re-naturalization of cities and build environment, a will to reconnect with the environment to fulfill biophilic tendencies 1.
The keystone here is to move within this contrast to redefine how this dichotomy nature-technology could be a design tool to shape the interface between humans and their environment.

Nature is considered as a force with its own agency, that can both serve humans but also question their positioning in the physical and cultural environment 3. It is an entity that qualifies spaces, both as performative tool and as third landscape to preserve biodiversity. At the same time technology is seen as an animated entity, able to interact with its surrounding both physically and digitally 13 Traditional ecosystem work because all components interact with their environment. At once artificial ecosystems and artifacts can be designed to be responsive to their surroundings, through a centrally managed system of sensors, actuators, and artificial intelligence. 16
The idea is not to concoct a new system but define a design opportunity to allow nature and technology to inhabit territories and architecture, giving new meanings and features to what is already there. The set for it to happen are railway yards, as providers of opportunities both within the build environment and a system of connections, both physical and digital.

Search for meaning | State of the art and framework

The relationship between humankind and nature, although inherently interdependent, has always been characterized by the dominance of the first on the latter, frequently also in the theoretical debate. The advent of technology and the technocentric approach, although with notable exceptions, tended to indulge this view with a constantly growing domination of humankind on the biosphere, leading to the current age, the Anthropocene. 14

An instance of this view is the Smart city approach, an urban strategy where traditional physical grids and public services are improved trough digital systems and new technologies, managing the use of resources and enhancing the processes’ sustainability. 4
The components of this network are interconnected and regulated by protocols that collect and react to flows of data, dealing with problematic conditions whereas forecasting future outcomes.

Hence, the Smart city frame and its theorization, traditionally shaped by the politic and economic perspective, could be an ideal set to reflect on the dichotomy nature-technology, growing beyond its simplistic slogan and using it as a set of opportunities for the paradigm to thrive.

In light of this, the contemporary debate argues 16 that is crucial to consider the human scale and its environment, especially looking at the smart city strategies to make them “truly smart”.
To do so, the attitude proposed in the research is to consider the involvement of nature, as humans instinctively crave for natural environment and benefit from it 9.

Through time nature was understood both as ideal original state, a frightful force and as resource with a clear boundary, to shape and tame to fulfill humankind’s needs and believes.

The overall tendency is toward the transformation of nature in an artificial entity. Today we live in a new age, the “age of Natural fabrication”, where nature is dealt with a scientific approach”. 10 Nature and landscape have partially left their contemplative role as otherness to tackle issues like climate change, food scarcity, comfort condition, becoming a performative nature. 18
Furthermore, as theorized by Gilles Clement 7 in his “third landscape”, in our age nature can’t be contained anymore by the boundaries of the garden but constitutes an anamorphic entity, aimed at maintaining biodiversity. This informal nature can be found in the abandoned and fringe area left alone by humans, where the unexpected can happen and biodiversity can thrive.

At the same time, Technology has historically been a tool to fulfill humankind needs and necessity, growing in importance through time 20. Today it is both material and immaterial, governing the physical and virtual space but also able to relate material (mobility) and immaterial (social) networks.
In the recent years its action has grown more pervasive, also inhabiting the digital sphere. Digital technology is an “ubiquitous entity”, 17 living inside the objects we interact with daily. It is a “constant and bidirectional extension in between the animate and inanimate beings.” 16

On scale and impact | How to relate theory and design

How can this broad theoretical reflection be implemented in a design perspective, contributing to the scientific debate on such actual topics?
The proposal doesn’t have the ambition to solve everything but positions itself in a very precise field of action, to avoid mechanic results and find clear solution to be implemented in a site-specific way. It is a peculiar standpoint, one of many possible choices but with a precise set of motivations behind it.
In this regard, railway yards are believed to be the ideal testbed to apply the nature-technology paradigm. They were chosen for their peculiar character, that brings together different aspects.
To describe the most important ones we can start addressing their location: being situated in the outskirts of the city or as barriers in city centers, they represent an opportunity to mend physical and social disconnection.
This site typology also relies on a system of physical networks, through which is deemed possible the implementation of physical and virtual connection to a wider territorial system.
Finally, nature reenters spontaneously in this context, an informal landscape that creates biodiversity 7. Through digital control it can also serve to solve specific issue, occupying unused soil with a function or act to remediate pollution and fragilities 2.
Ultimately the rail yards present a unique possibility to combine the field of architecture and engineering with an integrated approach.
The aim of the research is to produce a methodology, setting a scenery and specific action to be adapted to different context.
The goal is to conceive a solution that works on the site surface and at the same time on specific punctual solutions. To do so the project will be developed going back and forth different scales and city-size, from middle-sized city to megalopolis, understanding the relation of the design to the ascalarity of the digital network.

The precise way to achieve this is at the hearth of the research, being an explorative process that goes back and forth the theoretical and the design field. At this stage the idea is to use railway yards as Hubs for cities of different sizes, setting the scene for urban renewal and the use of unused spaces, creating an interface between the human, the city, and the territorial scale.
Its characteristics and objective are still to be defined but it will see the design of the station as an architectonical object and the implementation of nature and technology to solve spatial and territorial issues. The foreseen design result is a thought-provoking project, that defines the characters of “living” architecture and environment, 16 able to perceive and respond, an animated interface in between humans and their habitat. 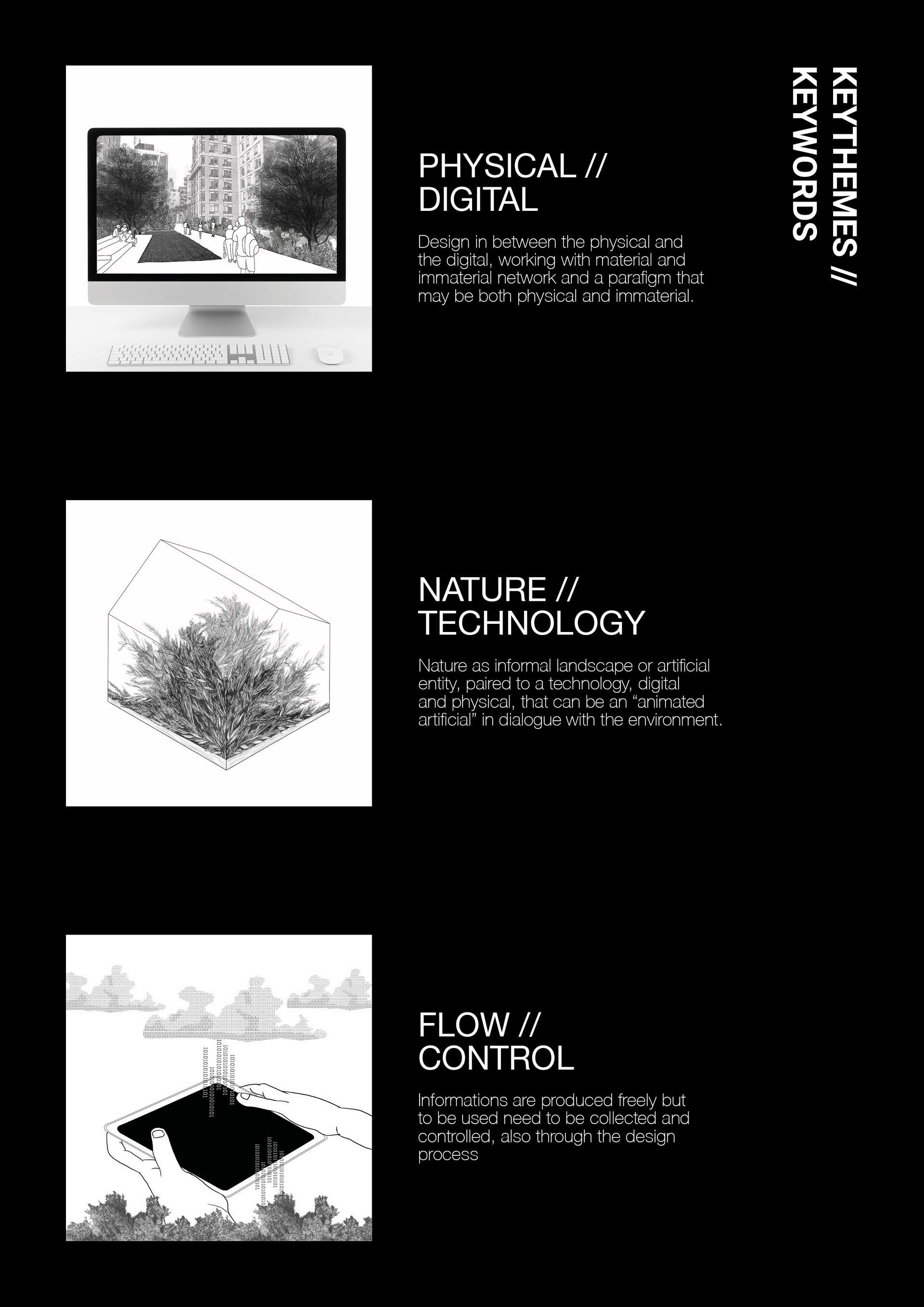 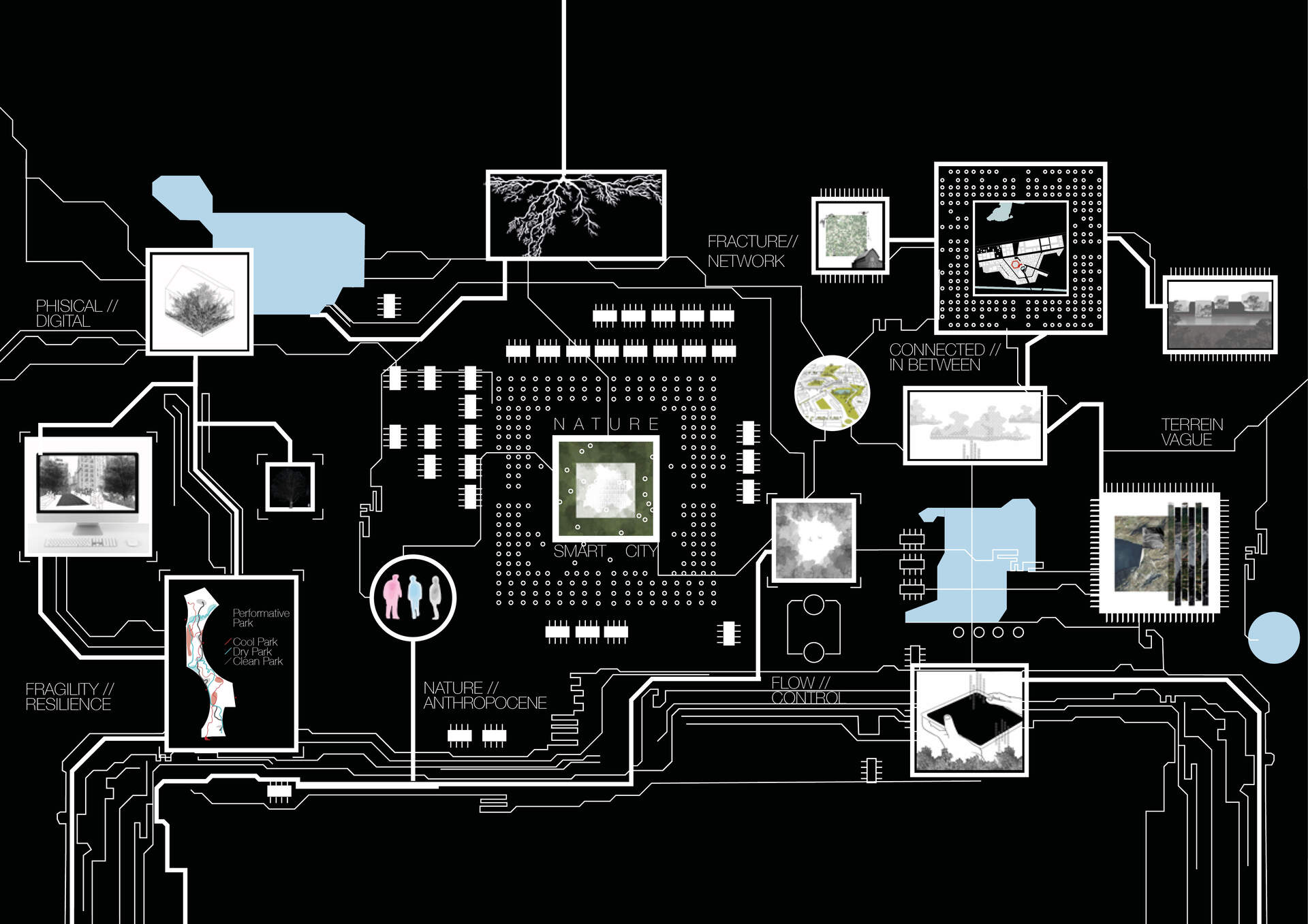 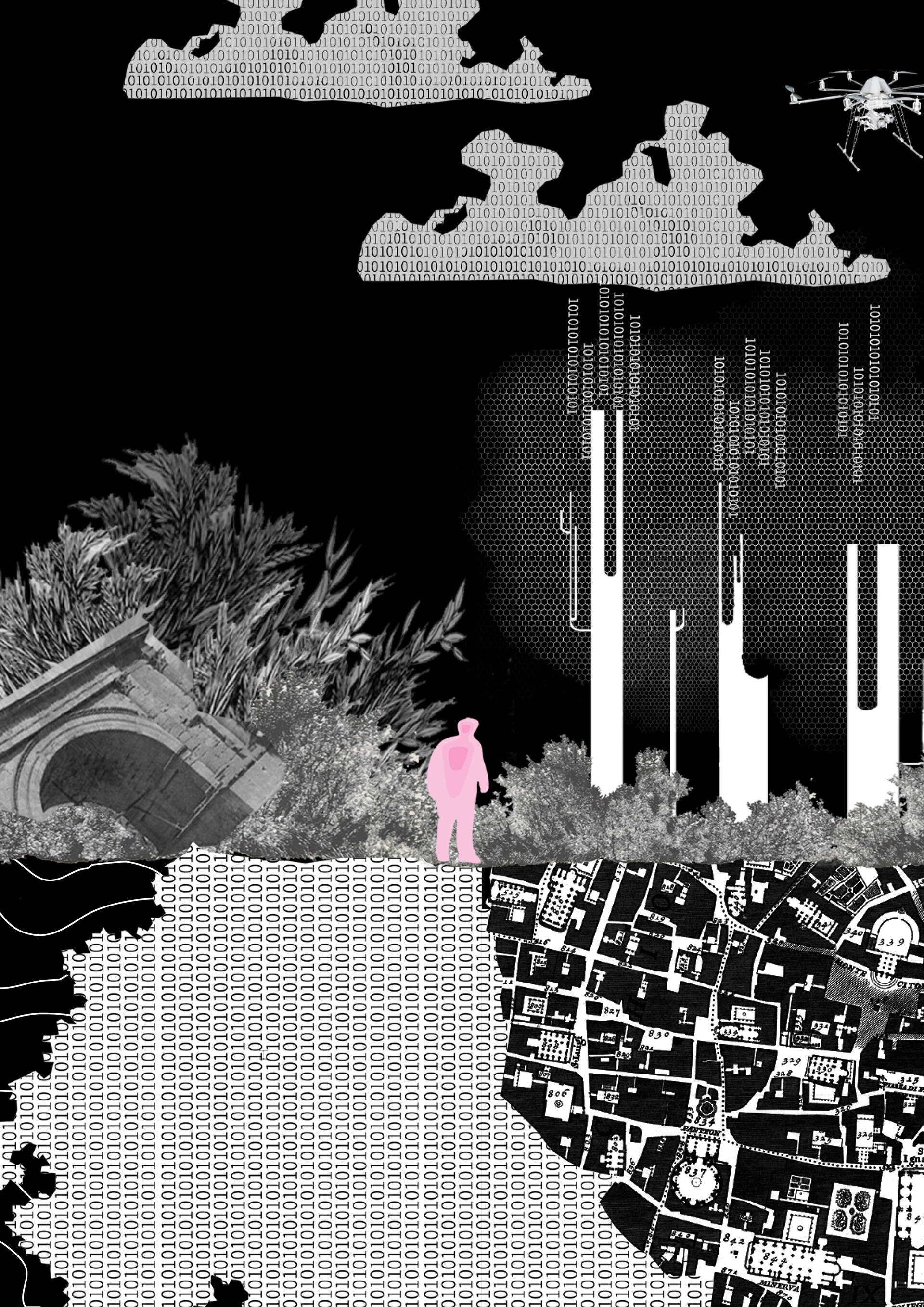 Source of the images: Original drawings by the author.